Although it was published 25 years ago, the fight club has been still discussing. Why do people believe that fight club is different from other movies? What does it make unique? Do you know that Fight Club is not only a movie? Fight Club is an adaptation from novel to film. This novel belongs to Chuck Palahniuk

The Storyline of THE FIGHT CLUB

The film starts with a nameless character whose name is the narrator. The narrator is a depressed person and he is a real loser. He does not have confidence and he suffers chronic insomnia. Also, he goes to a support group that is constituted of people who suffer from cancer. However, it does not work until he meets a woman whose name is marla. She is another fake attendee in a support group. After she meets with Marla his life beacon more bearable. (There are too much thing happened in this timeline but I do not want to explain them). At the same time, the narrator meets with Tyler. Tyler is a complete psychopath and he is savage. For example, he burns the narrator’s house. However, it causes them to become close friends. The narrator starts to live with Tyler. After a while, They found THE FIGHT CLUB. The Fight Club is a wild place where people come together and fighting each other. The fight club is run by Tyler and the narrator.

The number of Fight Club’s members is increasing fastly. After they had satisfied the number of members, they determined some rules. Now, fight club is a protest organization. They against capitalism and consumerism. They against to broken system. The fight club is constituted by the rabbles, workers, and people who are in outclass of society. They are stronger when they are  together. While these things have happened, Tyler and Narrator fall in love with Marla. At the end of the film, they destroy buildings that contain credit card records for erasing the debt of people. And the Narrator realizes that Tyler is not real, just his fantasy.

What does the fight club tell us?

The whole things were been happened is the end of the ’90s. Machines are started to replace to human place. The value of being human is decreasing in these times. If we watch scenes in the narrator’s Office, we can see criticism about that situation. Workers do not have value for employers eyes. Or if we look to the narrator’s home and his lifestyle, we can perceive criticism about modernism and consumerism. The narrator is wasting his own money to have more chic furniture. It is a good example of criticism of consumerism. The fight club is one of the most popular movies that criticize the system. There are many examples for this subtitles Marla and Tyler’s relationship or dialogues but this article is getting too much longer, I don’t want to bore you. 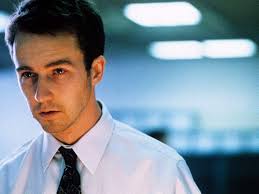 The narrator has a monotonous life that he hates. He has insomnia and hasn’t slept for six months. The narrator’s biggest desire is that having stylish furniture. But they are not satisfied with him. Edward Norton plays him. He plaid to many charters. And he takes part in many movies.

Tyler who is a soapmaker lives in a run-down house. Also, he has many jobs. He is a projectionist and waiters(at night). Tyler has a very complicated personality. He does not care about anything. He hangs out bohemian.

When we saw Marla first time, she is smoking a cigarette in a cancer group. The bells start ringing in that scene. Marla’s character has many similarities with Tyler’s. Both of them do not have worries about life and doesn’t afraid to die. For instance, she has cancer whereas, she is smoking all time.

MY OPINIONS ABOUT THE MOVİE

Fight Club is my favourite movie. Let’s talk about why I love fight club the most determinative factor why fight club is my favourite movie is that fight club has too much witty criticism. The Fight Club bravely criticizes the community and some ideological currents like modernism and consumerism. This is prices for me because it is hard to do this. And fight club has an unexpected end. Watching this movie was an enjoyable experience for me. Now, Fight Club one of the best movies of David Fincher. After 20 years it became a cult movie of modern times.

UPPSS I TALKED ABOUT FIGHT CLUB!!!

This website uses cookies to improve your experience while you navigate through the website. Out of these, the cookies that are categorized as necessary are stored on your browser as they are essential for the working of basic functionalities of the website. We also use third-party cookies that help us analyze and understand how you use this website. These cookies will be stored in your browser only with your consent. You also have the option to opt-out of these cookies. But opting out of some of these cookies may affect your browsing experience.
Necessary Always Enabled

Performance cookies are used to understand and analyze the key performance indexes of the website which helps in delivering a better user experience for the visitors.

Analytical cookies are used to understand how visitors interact with the website. These cookies help provide information on metrics the number of visitors, bounce rate, traffic source, etc.

Advertisement cookies are used to provide visitors with relevant ads and marketing campaigns. These cookies track visitors across websites and collect information to provide customized ads.

Other uncategorized cookies are those that are being analyzed and have not been classified into a category as yet.